Only 1 left in stock

Please Note: The Included R.O.B the Robot toy is faulty and likely needs replacement gears, the box is also missing one of it’s flaps, otherwise everything is included and in well cared for condition, the set has been priced accordingly.

What started life as the Famicom (Family Computer) in Japan went on to become the machine that saved the videogame industry in America. After a major games slump following the 1983 north american market crash, Gamers scrambled to see and play classics like Super Mario Bros., The Legend of Zelda and Excitebike, all of which were leaps and bounds ahead of other home systems’ games.

Gaze up at the Nintendo Entertainment System’s towering pile of over 500 titles, and you’ll spot classics like the original The Legend of Zelda and the classic Super Mario Bros. – the Shigeru Miyamoto-developed side-scrolling platformer that set the new standard.

Supplied with a horizontal slab of plastic that rests in your palms featuring a cross-shaped directional control pad, two small round buttons for your thumb and twin rubber ‘Start’ and ‘Select’ buttons. The basics of the NES controller became an industry standard that still resonates today.

***Please Note*** Images are for reference only and are not a representation of the actual condition of Pre-Owned Items. Please check our Product Grading page for more information on how we grade our products. 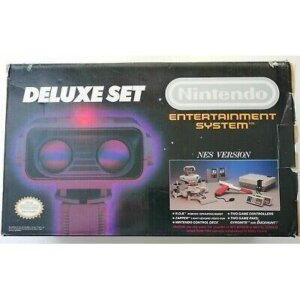 Any cookies that may not be particularly necessary for the website to function and is used specifically to collect user personal data via analytics, ads, other embedded contents are termed as non-necessary cookies. It is mandatory to procure user consent prior to running these cookies on your website.

Please note that during National Lockdown, orders are dispatched on Tuesdays and Thursdays. Dismiss